In ladder climbing and crafting, Geometry and Trigonometry has a massive influence. This is because these factors determine whether the ladder follows the accurate angle rule that is safe for OSHA standards.

So, do you know what the ladder angle rule is? If not, then no worries! I’ll discuss in detail what it is, how you can measure the correct angle, and why the rule is so important.

By the books, ladder angle rule refers to the fact that for every 4 feet of height, the base position of the ladder must be 1 foot away from the wall.

This rule exists to improve the safety of the user. If you are interested in knowing more about the ladder angles rules, scroll down below and keep reading.

What Is the Ladder Angle Rule?

According to official standards, the ladder angle rule consists of an important safety rule that all ladder climbers must follow. This rule states that for every 4 feet the user climbs up a ladder, its base must be 1 foot away from the wall vertically.

For example, if the user climbs up by a total of 12 feet, the ladder must be about 3 feet in vertical distance from the supporting wall. The ladder is safe to climb as long as this rule is met.

This rule helps increase the ladder’s stability so that you will be better protected against any form of ladder-related accidents. Remember, the higher you climb, the more unstable the ladder will become.

You will even notice that the ladder vibrates or shakes very often. The ladder angle rule allows the ladder to distribute its weight throughout its frame. As such, increased stability is established.

How Can You Calculate The Ladder Angle?

There are two main methods that you can use to calculate the ladder angle of any ladder being used. These methods are called the 4:1 rule and the stand and reach approach.

We have compiled and stated both of these methods below and the procedures you can follow to use these calculations to your advantage.

The first method we are including is more straightforward than the two methods. The steps below can help you to complete the procedure correctly. 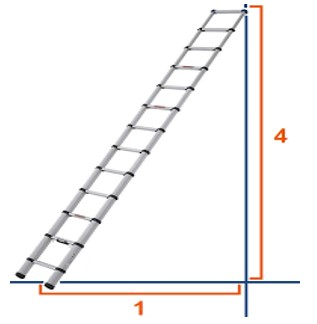 Start by unfolding the ladder and putting it against a supporting wall. Make sure that the ladder stands at a 75-degree angle from the wall you have put it against.

According to the rule, you must allow the ladder’s base to maintain a 1-foot distance from the wall for every 4 feet you climb.

To make the calculations; you must first find out how much length you will be climbing up. Then divide that figure by 4. For instance, if you are going to climb 16 feet up, diving that by 4 gives 4.

Now that we have the factorial value, which is 4 in the case above, you can extend the ladder’s base by 4 feet in vertical distance from the supporting wall.

The Stand And Reach Method

The second stand and reach method is slightly more complicated than the first one. However, this is just as easy as the first one we have included above. 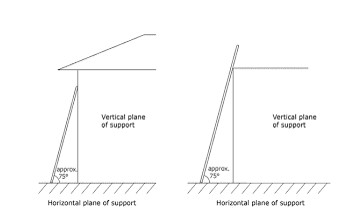 Whether you are using a regular ladder, an elevating ladder, or a step ladder for elderly, start by placing the ladder correctly against the wall and check to ensure that it doesn’t shake profusely.

Stand against the ladder and face it. Place your toes at the base of the ladder. Make sure that they are side by side with the side rails.

According to the rule, the degree of angle allowed between the ladder and the wall it is included against is about 75.5 degrees or approximately 75 degrees.

Put your palm on the same level as your shoulder and check whether the angle is near 75.5 degrees or not. Do note that only a slight 3.22-degree deviation in the inclined angle is allowed.

Therefore if the final inclined angle comes out to be 78.2 degrees, the ladder is at a safe position. However, if this angle is 80 degrees, it is not secure.

Why Is It Important To Follow the Ladder Angle Rule?

The ladder angle rule is an essential safety measure that every climber who uses ladders should always use. Not only does it decrease the chances of potential accidents, but it also helps create a decent posture.

We have displayed some of the more important reasons that you should always follow the ladder angle rule along with their details below.

Each year there are a lot of accidents and even deaths that are caused by miss climbing the ladder. If the users follow the angle rules properly, it reduces the chances of unforeseen accidents.

If the ladder is not placed appropriately, you will never be able to complete the purpose you are climbing it for. This is because otherwise, the ladder will start to shake.

With the ladder placed at the correct angle, the ladder won’t shake as much as before. It is stable and therefore perfect for doing your task.

Due to how much an inappropriately positioned ladder shakes, it is near impossible to work with the right posture.

However, if the rules are followed, the ladder won’t shake anymore. As a result, your posture will not be affected anymore.

When working on top of the ladder, there are many things that you can compromise. However, always keep a bottom line that you will never be willing to cut down on.

This bottom line should be related to your safety since there are plenty of variables involved that can cause potential accidents while working on top of the ladder.

As long as you are willing to follow specific rules and precautions and do not compromise with them, you will be able to get your work done in no time with the highest safety rating.

Hello, I’m Joseph, I’ve created this site to help people who are facing difficulties in purchasing the right ladder for their specific task. By profession, I’m a businessman, and I learn about the ladder for my business purpose. While running my business, I saw that most of my customers don’t have adequate knowledge about this tool. Consequently, they are not getting the proper benefit from it. That’s why I create this site to help them and others who are facing the same problem.